16.02.2018. The Gold, Silver, and Bronze “Azarpeshas” – the grand prizes of Saperavi World Prize 2017 (“SapPrize”) international wine contest – were presented to Ambassadors and diplomatic representatives of the winner countries at a special award ceremony on February 15.


The Grand Prize winners are: Saperavi winemakers from Australia - Grand Gold, USA - Grand Silver; Kazakhstan - Grand Bronze. Wines of best-known Georgian variety from all over the world were judged in Georgia for the first time at SapPrize contest organized by us - the wine news publisher Hvino News. 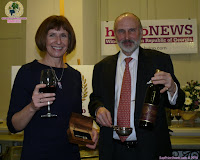 The Grand Gold Prize was awarded to Cirami Estate 2015 Saperavi from Australia. "The Gold Azarpesha" was presented to David Kereselidze, Director of Department of Asia, Africa, Australia and Pacific Rim of Georgian Foreign Ministry. The foreign Ministry will deliver the precious prize to Georgian Embassy in Australia, which will present it to the winner in Canberra.

“An interesting fact is that the winning wine Cirami Estate is produced not by a winery but by a non-profit organization called “Riverland Vine Improvement Committee”, and the wine is called after Richard Cirami, a pioneer in vine selection there”, - commented Alexander Kaffka, head or SapPrize organizing committee, who led the ceremony.

The winner of the Grand Silver Prize is McGregor Vineyard’s Black Russian Red 2010 Saperavi from USA. "The Silver Azarpesha" was presented to Elizabeth Rood, Charge d'Affaires at US Embassy. The Embassy will deliver the award to the winner John McGregor in USA. John McGregor’s comment was quoted: “We are so honored to receive such recognition. We planted these grapes in 1980 and were the first commercial Saperavi producers in the United States. It is wonderful to see confirmation of my father’s belief that Saperavi could grow here in New York and make world class wines”.

The Grand Bronze Prize was awarded to Lagyl Arba Saperavi 2013 from Kazakhstan, and presented to Gulmira Sultanali, Charge d'Affaires of Kazakh Embassy.

All the high-level diplomatic representatives thanked the organizers of SapPrize for the important initiative and for the chance to be represented at the Georgia’s first international contest for Saperavi makers.

Alexander Kaffka, publisher of primary Georgian wine news resource Hvino.com, said: “The concept of SapPrize is to reach out to winemakers worldwide, who produce wines from the iconic Georgian Saperavi. After lots of research and networking, we got samples from 4 continents - Australia, North America, Asia and Europe, including very remote countries such as New Zealand, as well as former Soviet neighbors such as Armenia or Kazakhstan. At the first contest we decided that only foreign Saperavis take part, but in future we will welcome Georgian producers as well”.

Both Foreign and Georgian Saperavi wines were served at the ceremony. The guests had a chance to taste hard-to-find Saperavi samples from Australia, New Zealand, USA, Kazakhstan, as well premium-quality Georgian-made Saperavi wines from Vaziani Winery, Tchotiashvili Family Winery, and JSC Cradle of Wine.

An exhibition of rare ancient "azarpeshas" (Georgian traditional wine drinking cups) from private collections, which were the inspiration behind creation of SapPrize awards, was also exhibited during the event at iArt gallery. “Instead of traditional medals, to stress the Georgian dimension of this wine contest, our prizes are inspired by ancient Georgian drinking cup usually made of silver and gold – so called azarpesha. We are awarding miniature azarpeshas, made of the same precious metals. These prizes are absolutely unique; they are hand-made by Georgia’s leading jeweler Jimi Lominadze from our partner Zenaari company”, - commented the organizer of SapPrize.

Alexander Kaffka expressed appreciation to Georgian Embassies in Washington and Canberra, and personally to Ambassadors George Dolidze and David Bakradze, for being patrons of SapPrize, and for their support. “I want to thank International Chamber of Commerce (ICC) for absolutely invaluable help in everything, including the hosting of our tasting ceremony on ICC premises”, - said Alexander Kaffka, - “Our sincere thanks also go to Ms. Samson Uridia, Deputy Director of Revenue Service. I also would like to thank the representative of Lasare Cargo Terminal at Tbilisi airport Givi Karchava, who actually became sponsors of our event.” The organizers also expressed thanks to Vaziani Winery, National Intellectual Property Center “Sakpatenti”, Wine Tourism Association, and Ia Bokuchava of iArt Gallery for support.

Saperavi World Prize is a new international wine contest in Georgia, which brings together the wines from winemakers from around the world who use the Saperavi variety. Saperavi is a grape variety native to Georgia, which is becoming increasingly popular with winemakers around the world.
Saperavi World Prize (“SapPrize”) is conceived to become not only a wine contest of Saperavi wines produced in all continents, but a meeting point of international winemakers and Georgian tradition-keepers, backed by eight millennia-old winemaking history of Georgia – the cradle of wine. Official website of SapPrize is sapprize.hvino.com.

Quotes by International Wine Experts:
About the Organizers:

Saperavi World Prize 2017 is organized by Hvino News with support of ICC Georgia.

Hvino News is the world’s primary news and information resource on Georgian wine, published daily since 2012, in English and Russian languages. Its traffic has exceeded one million views, reaching readers in over 160 countries.

Saperavi World Prize 2017 is organized under patronage of: