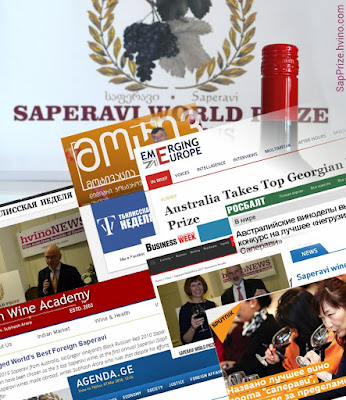 01.03.2018. The results of first Saperavi World Prize are in the focus of many mass medias internationally.

Full list of media coverage by countries is here, and screenshots are here.

"We're so excited we can justifiably say we are one of the best places outside of Georgia to grow this variety anywhere in the world, ” - an article in Australian newspaper quoted a participating winemaker Leeanne Puglisi from Ballandean Estate winery.

"Martin Cooper, owner of  Ridgemill Estate [a participating winery] said he was stoked when he heard the news. "We had to pinch ourselves,” he said. "It's pretty incredible to get a gold medal on a world platform,” Mr. Cooper said, as quoted by Australia's newspaper. "We've been growing Saperavi here for six or seven years and it's been doing well in shows but to win on an international stage in the home of Saperavi is pretty special".

"Cirami Estate’s 2015 Saperavi was crowned the ‘Golden Azarpesha’ in the inaugural wine competition, coming in first place against the rest of the world...It’s akin to an American winning a meat-pie making competition judged by Aussies", - reads article in Murray Pioneer.

"Riverland winemakers are well known for their adoption of alternative grape varieties... And now the South Australian region has won endorsement from a most unlikely source — Georgia. The country, at the intersection of Europe and Asia and which claims to be the birthplace of wine, held its inaugural international wine competition for wine made from the native Georgian grape Saperavi", - writes Alexandra Laskie from the Weekly Times.

Article posted in Emerging Europe (Great Britain) noted that "winners received azarpeshas — Georgian traditional wine drinking cups. An exhibition of rare ancient cups from private collections, which were the inspiration behind the creation of the SapPrize awards, was also presented during the awards ceremony".

An article published in USA reads: "It is always challenging to plan an award ceremony of this significance. The SapPrize award presentation had to be rescheduled when the American Ambassador couldn’t attend because of the “Shutdown” of the U.S. government due to the budget bill failing to be approved".

"I had discovered Saperavi over 6 years ago while judging at the Hong Kong International Wine & Spirits Competition in November 2011. I came across wines with these grapes when most people in my panel of which I was the President had not tasted or even heard of these varietals before. But the wines had enough personality and vivaciousness to win a few awards. Looking at the increasing interest in the world not only for this varietal from Georgia but also its local production in several countries around the world, Georgia has announced a world competition for Saperavi wines", - noted Subhash Arora, who heads Indian Wine Academy.

Many thanks to our colleagues in the mass medias for attention to Saperavi World Prize.